Recording your fleet’s activity, including individual routes, is of a great benefit to any company. Especially in case a company owns several vehicles used by several staff members. Having a clear overview of your fleet’s utilisability means having an absolute control over the routes done, distances covered and fuels consumed.

LogBook provides records of all the routes done by each vehicle individually. Therefore, it is possible to see the exact route (where from and where to a vehicle went) on the map, a number of kilometres covered and the time scope of the route. 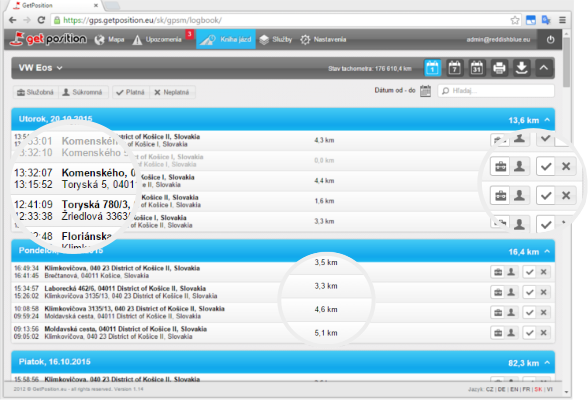 A daily as well as weekly and monthly list of routes is available. Within the list it is possible to assign a tag to a particular route, which makes it possible to distinguish between business and private routes; and valid ones from invalid. Those are later not included in the total distance.

GetPosition’s LogBook provides a detailed overview of how your fleet is used for various purposes.

By using the application it is possible to exactly identify where and at what time your vehicles were located on a certain day. It is therefore advantageous to be able to verify whether your vehicles are used exclusively for the purpose of fulfilling the work-related duties and tasks.

Placing a tracker inside a vehicle and the subsequent check-up of the routes covered contributes to enhancing work morale and eliminating the misuse of the fleet by staff members.

For companies this means substantial cuts in fuel consumption as well as cuts in costs related to other liquids and spare parts, since vehicles are not excessively (and unnecessarily) used and worn out.

Another benefit LogBook offers is the option to export the saved routes, including all the data, to a CSV file. As a result, it is not anymore necessary to keep a separate evidence of the distances covered – GetPosition will provide you with all the parameters required in one package.

The data from the application may be used with no trouble for the purpose of documenting the fleet-related costs (e.g. for the tax clearance).

GetPosition application with its LogBook feature will let your company save the data on your fleet’s activity in a convenient and automatic way and will provide you with detailed records of the routes and distances covered. 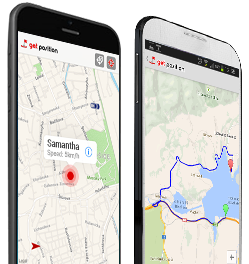 Coming soon: LogBook will include yet another useful functionality – not only will you see the distance and locations your vehicles covered and have been to, but also how many Euros each and every saved route cost.

About the Author: GetPosition Team